After a self-imposed break of several years I have at last started ringing again. Yesterday evening I set up a single 12m net behind the apple tree in the back garden, adjacent to the feeders which I've been filling for the last few weeks. Arising at dawn (after little sleep due to a feverish baby) I unfurled the net and awaited a trickle of birds.


Over a couple of hours I had a standard selection of typical garden fare - 2 blackbirds, three greenfinch, two blue tits, a coal tit, a dunnock, a robin and a great tit. 11 birds in all and I suppose not too bad for a relaxed morning at home. The expected pheasants, collared doves and woodpigeons failed to materialise which was a result. 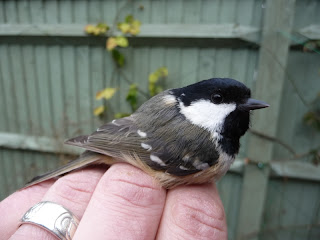 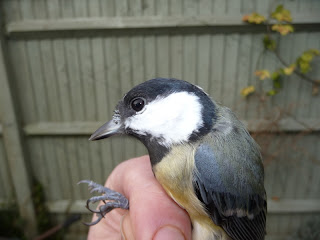 My ageing skills are rusty to say the least but generally speaking I had little trouble with these birds. The only 'tricky' thing was the robin - I could find no obvious moult limit on the greater coverts, all being the same tone and shape. However, there were five small pale wedges to the outermost coverts. After checking with Messrs Svensson, Jenni and Winkler it appears that full adult birds can, and do, show several pale wedges to the greater coverts. The key is that these diminish in size towards the body, rather than forming a neat break. This feature, coupled with a dark interior to the upper mandible, broad and rounded tail feathers and a dark brownish eye led me to age the bird as an adult.